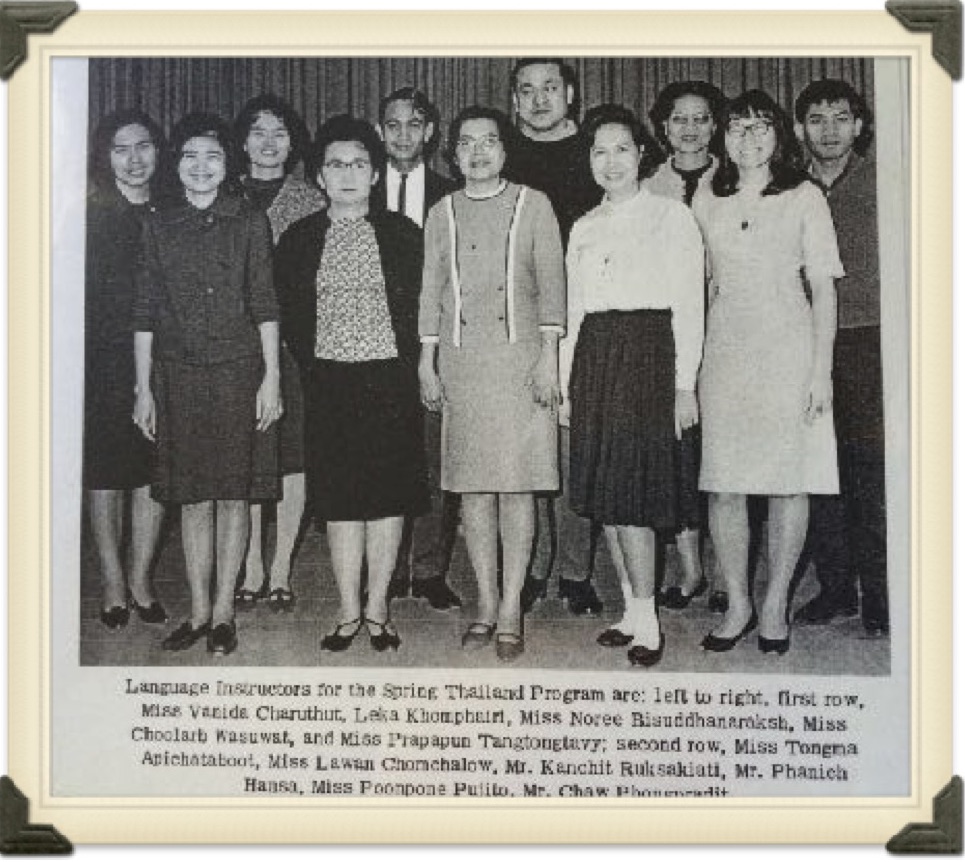 “Human-trafficking,” “exploitation,” and “victim” are three words that have ruined how the world sees Thai women. These words have hidden them, covered them like invisible ink. They posit Thai women as passive and exotic, or worse as defeated, abused casualties of modernity. Granted, a significant number of Thai women have been ravaged by involuntary sex work, poverty, and a crush of systemic oppressions. But my point is that Thai women do not yet possess the privilege of being seen as more than a stereotype, as having depth. Even at the last American Historical Association Annual Meeting in Chicago, surrounded by people I thought understood the need to de-exoticize the dangerous romance surrounding Thai women, someone asked me, “So when does the objectification or, er, sexualization of Thai women begin?” I wanted to reply, “You just did it. Again.”

My poster hung behind me at the AHA. It highlighted Thai women participating in a professional, educational program, as language instructors for the Peace Corps. Many Thai women were enlisted in institutional and informal, cultural nation-building programs in the 1960s. They were tasked by their state and non-state institutions to show the Western world Thailand was modern and worthy of an equal place in the global commonwealth of nations. Some women took this charge seriously for personal and political reasons. They had agency and agendas. And they helped shape Thai modernity and its international image.

In the 1950s and 1960s, at the peak of decolonization in Southeast Asia, Thailand shared a common challenge with its formerly-colonized neighbors. Thailand had never been colonized, but it, too, needed to develop a modern national identity, one that recalled a deep sovereignty grounded in a unique history and distinctive cultural tradition, while also invoking an image of worldly cosmopolitanism and global connections. There were palpable reasons for doing this, such as enticing foreign investors to underwrite the Thai economy. State publications like “Holiday Time in Thailand” aimed at American investors and consumers, blatantly advertised Thailand as an ideal place to spend one’s vacation or invest in its emergent tourism industry. There were also abstract ideological reasons for undertaking a national identity project. The Cold War accelerated in these decades. But communism was antithetical to the Thai kingdom, so a latent political friendship between the United States and Thailand was revived.

One manifestation of this renewed relationship took form in the United States Peace Corps program. The Peace Corps agenda often reflected U.S. foreign policy. During the first program in Thailand in 1962, American volunteers taught Thai children English as a second language. On the American side of the exchange, a Peace Corps hiring policy mandated only the hiring of “native speakers” as language instructors to teach volunteers Thai, enabling Thais to participate in this transnational transaction.

Budgets allotted to volunteer training centers made hiring from Thailand impossible, so language instructors were hired from the pool of Thais already in the United States as students. An exception was made in 1967 for a female instructor; Poonpone Pujito was flown in from Thailand for the supervisory position of Language Coordinator in Dekalb, IL. Both of the individuals who held this position were women, highly educated, and sought after by the Peace Corps for their expertise and teaching experience: Noree Bisuddhanarakah and Poonpone Pujito.

Almost half of the language instructors under Pujito and Bissuddhanarakah were also women. Of the twenty-two hired for the 1967 program, nine were women. Twelve of the twenty-one employed for 1966 were too. These women understood the geopolitical effect they invoked through their work. For example, Leka Khomphairi, an instructor in 1965 and 1967 wrote, “I find my work not only personally rewarding but also I feel I’m making myself useful to America, and at the same time, contributing in a small way to better relations between United States and Thailand.” I found other statements to the same effect in the archives of the Center of Southeast Asian Studies at Northern Illinois University.

The sense women had that their work would have a positive effect on Thai society was also documented by Jean Barry, who conducted a sociological study on Thai students in the United States in 1966. Barry discovered that students perceived themselves as “part of the future elite of Thailand.” Their American educations along with work experience, such as being a language instructor for the Peace Corps, was a kind of “training abroad [which] mark[ed] them as privileged experts… highly sought in positions of influence” once home in Thailand.[1]S.J. Jean Barry, “Thai Students in the United States: A Study in Attitude Changes.” Cornell Thailand Project Interim Reports Series 11, Data Paper no. 66 (May 1967): 62. Students intended to return home to Thailand and apply the skills they learned overseas towards Thai development.

Thai women, including those who worked as language instructors as part of the Peace Corps program, were not passive recipients of history; they were transnational actors. They were aware of their skills and their power to effect change, and they used them to do just that.

JoAnn LoSavio is a PhD candidate in History at Northern Illinois University and a Carter G. Woodson Fellow 2017-2019. She is a feminist historian. Her research focuses on Southeast Asians from Thailand, Burma, and Malaya and their transnational interactions, and Southeast Asian nation-building and decolonization in this region between 1950 and 1970. She is expected to graduate in Spring 2020. Her approach to historical research is heavily influenced by her anthropological background (M.A. Anthropology, Emory University, 2014). She incorporates oral histories, and ethnographic, visual, and other cultural material into her analyses of transnational flows of culture between the United States and Britain, and Southeast Asia in the mid-twentieth century.
Grad Student Post | Transnational
← Wanted: Book Review Editor, Journal of American Ethnic History
(Im)migration Detention: A Selective Bibliography →
#