Editor’s Note: Periodically, the blog features contributions by this year’s IEHS award winners to give our readers a sense of ongoing scholarship debates in Immigration and Ethnic History and related fields. In April 2016 IEHS awarded Megan Asaka the Outstanding Dissertation Award.

Unsettled City examines the early period of Seattle’s urban formation, the years before the spatial boundaries of the city were firmly drawn. From the origins of the city in the mid-nineteenth century through the early years of World War II, Seattle’s urban workforce consisted overwhelmingly of migratory and transient populations who labored in the seasonal, extractive economy of the Pacific Northwest. The city benefitted from the mobility of a largely Native American, Asian, and African American labor force, even as municipal authorities, political elites, and reformers continually depicted these workers and the spaces they inhabited as undesirable, troublesome, and impediments to urban progress. Today, the physical landscape bears little evidence of their historical presence in the city. As my work shows, this was not an accident, but rather the result of specific laws, policies, and practices that allowed for their inclusion as laborers but not as full citizens or participants in urban society. Viewed as expendable, these migrant sites became subject to surveillance, policing, and, eventually, demolition. Few were left standing by 1941.

Historians, I argue, have underestimated the impact of mobile populations in shaping urban regions because of an archival bias that tends to privilege those who are stationary. People on the move often circulated outside the official realm, leaving historians with little documentation of their presence in urban areas. To more fully uncover the history of migration and labor in early Seattle, I developed methodologically creative approaches for understanding the urban past. Facing a dearth of archival evidence, I created my own sources through mapping and digital technology that helped to reconstruct the routes that migratory people traveled and the places they stayed along the way. I compiled data culled from local newspapers, the census, sociological reports, industry records, and oral history to produce new maps tracing migrant networks and pathways in and around Seattle. I supplemented these maps with floor plans, photographs, and building descriptions found in engineering and fire department records to excavate the built world that migrant people inhabited. These sources not only repopulate the historical record with new actors, but also reveal the wholesale erasure of mobile populations in official representations of urban space.

Though in many ways the case of Seattle is unique because of its high concentration of seasonal workers and migrants during the prewar era, the questions that the dissertation raises about erasure, memory, and the limits of archival representation can be applied in diverse geographic and chronological contexts. Unsettled City seeks to understand how we come to know what we know about the urban past and thus how we can build towards more equitable futures. 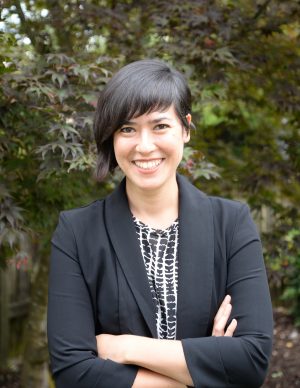 Megan Asaka is an assistant professor of history at the University of California, Riverside where she specializes in Asian American history, urban history, and public humanities. Her current book manuscript, “Unsettled City: Migration, Race, and the Making of Seattle’s Urban Landscape,” explores the role of mobile populations in shaping urban regions through a case study of late nineteenth and early twentieth-century Seattle. The dissertation on which this project is based won awards from the Immigration and Ethnic History Society and the Pacific Coast Branch of the American Historical Association. She has also worked extensively in the field of public history, including five years as an oral historian and visual history coordinator for Densho, a digital archive of primary sources related to the World War II incarceration of Japanese Americans. She received her PhD in American Studies from Yale in 2014.
IEHS Awards
← On the Eve of Immigration Restriction
No business like the clothing business: how I came to write The Rag Race →
#