No Whiskey on St. Paddy’s Day: A Transition from Genealogical Curiosity to Historical Inquiry

A misconception of the discipline of history is that it is “all about names and dates.” But, another misconception is that names and dates are the primary concern of genealogists, or those who hire them. Though neither of those ideas is wholly accurate, and the work of genealogists and historians does overlap, the genealogist tends to look inward, e.g., toward one’s own family and identity, while the historian looks outward from the subject toward context and meaning (O’Hare, 2002). In my current research project, I am applying broader historical inquiry to genealogical curiosity.

My great-grandfather gave me his hand-written family pedigree chart over a decade ago. He told me that his grandfather was the first sheriff of Madison, the capital of Wisconsin – he was a sheriff on horseback. The chart he gave me listed his grandfather, John B. Hyland, as having been born in Scotland in 1833.

I soon became attached to an assumed Scottish heritage, joining a bagpipe band and reading “Rabbie” (Robert) Burns. But I wanted more. Why had he left Scotland? Who were his parents? Am I related to William Wallace?

Genealogy seeks answers to a very specific set of questions: “Who are my ancestors?” “Where did they live” – or better yet, “Where are they from?” “How far back can I trace my line?” “Who was my first ancestor to come to America?” Genealogical curiosity is not a bad thing; family history can have a deep impact on a person’s sense of their identity. But this type of research is limited and can restrict interpretation to suit the needs and wants of the seeker.

By applying historical methods and questions to my family’s history, I have fleshed out a much richer picture of my relative Hyland and his place in history.

I was excited to find Hyland’s naturalization papers in Madison, Wisconsin. Though listing little more than a date and witnesses, they also revealed a supposed origin in Ireland. Meanwhile, I had found records of Hyland living in Cincinnati, Ohio. Knowing his wife’s name was Catherine, I found a county marriage record in 1849…which led to a church marriage record…which led to baptism records for two daughters. Shortly after coming across the 1850 census record for John and Catherine—in Cincinnati—I found John’s petition for naturalization—dated 1853.

Significantly, it listed his date of arrival in New York…from Dublin, Ireland. With this key piece of information, I connected John to the Bachelor, the ship that brought him from Ireland.

Partway into my research I found an article in a Madison newspaper dated 1874 which detailed a going-away party held for Hyland, who was apparently moving to Providence, Rhode Island. The article detailed his life…his activity with the local temperance society, working at the opera house, and involvement at church. Martin Cantwell, a longtime friend of Hyland, recalled how he drilled the Madison Guards, a local Irish militia unit.

Sure enough, Hyland was a member of and drilled the Madison Guards, members of which fought in the Civil War and joined the regular army—though he never did. He also apparently drilled the Madison Turnverein, a local chapter of the German gymnastic fraternal organization. His going-away party was held at Waltzinger’s Ice Cream Saloon. August Frederick Waltzinger was a member of the Turner society in Madison, and his daughter Emma married Hyland’s nephew in 1886.

Through the course of my research, I had discovered that my ancestor was not from Scotland, but had fled Ireland, as a refugee of the Great Famine. He was an Irish Catholic, and lived in Cincinnati during the riot of 1853 when over 1,000 Germans marched in opposition to the archbishop. Hyland’s move to Wisconsin was typical—while those who stayed in Cincinnati moved up the social ladder within a couple generations, moving on was another trend for immigrant populations. His life paralleled the expansion of the Old Northwest, as he and his family traveled to Madison, Wisconsin, the year the first railroad station was built there. His involvement in the temperance movement and the abolition debate—both topics of international scope—is more significant than a family history curio cabinet.

In short, by looking at the life of one man, it is possible to add to the scholarly discussion about many historical themes and topics. My work focuses on immigration and ethnicity in the latter half of the nineteenth century, topics which have resonance and importance today.

And I am still looking for John Hyland’s parents. 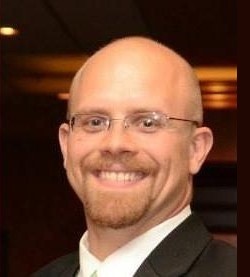 Jesse David Chariton is an M.A. Student at Columbus State University (Columbus, GA), completing the Race, Ethnicity, and Society Track. His thesis is about the desegregation of Lutheran Churches in the South in the twentieth century. His earlier research has been about Freemasonry, Religion, and Race. He is also a member of the Association of Professional Genealogists and the Society for German-American Studies.
Grad Student Post
← South Asian Immigrant Cab Drivers in New York City
Call for submissions: Do you want to showcase your research and win $100? Enter the Immigration and Ethnic History Graduate Student Blog Competition, due January 15, 2019 →
#