In the past year, there have been a series of #syllabi designed to provide a historical and theoretical context for critical social issues with deep historical roots in the United States, including #FergusonSyllabus, #CharlestonSyllabus, #BaltimoreSyllabus, and #StandingRockSyllabus. These syllabi and their hashtags provide a collective venue for educators and a broader public seeking resources that can help contextualize what is unique and what is old about our current political moment. Designed by a consortium of scholars affiliated with the Immigration History Research Center at the University of Minnesota and the Immigration and Ethnic History Society, of particular importance to immigration historians and ethnic studies scholars is #ImmigrationSyllabus.

How does one teach immigration history when our national leaders have drawn great attention to immigrants, immigration, and the “migrant-as-threat trope”? As a professor of Chicano/a Studies teaching the introductory course in my department this Fall, I found myself in the difficult position of teaching lectures about Chicano/a History while finding themes of xenophobia, nativism, and social activism emerging all around me. Placing ethnic Mexicans at the forefront of the presidential elections, then candidate Donald Trump infamously launched his campaign stating “When Mexico sends its people, they’re not sending their best…They’re sending people that have lots of problems, and they’re bringing those problems with us. They’re bringing drugs. They’re bringing crime. They’re rapists. And some, I assume, are good people.” Responding to the 2016 election, my department held a Town Hall to discuss student reactions to its outcome, such as potential policy impacts on Deferred Action for Childhood Arrivals (DACA), construction of a border wall, and plans for deportations. In that conversation, students and faculty shared their concerns, hopes, and plans for action.

Launched soon afterwards, in January of 2017, #ImmigrationSyllabus provided a foundation for thinking through how we might begin to address a series of student comments that touched on the same theme: How do we tackle potential threats levied at Chicana/o and Latina/o communities in unity with those levied at other targeted groups, from the water protectors at Standing Rock to refugees in Muslim majority countries? And, how might we as a university and a department approach these threats, movements, and their agendas as affiliated, rather than isolated from one another? One such tool set would include looking to shared histories of immigration and migration to identify where we have seen these practices before. More so, these histories help unpack how repeating scripts facilitate particular divisions and affiliations in times when “reactionary politicians sharpened and exploited dividing lines between insider and outsider,” as recently described by historian Paul Kramer.

Like other #syllabus movements, #ImmigrationSyllabus is a crowdsourced set of readings and multimedia resources designed to provide an historical context for current debates over immigration reform, integration, and citizenship. This Spring, I have designed a course based on the #syllabus with the aims of providing a historical lens for viewing immigration politics, unpacking the meaning of “a nation of immigrants” in the United States today, and discussing the potential of new #curriculum for generating public discussion. I have the unique opportunity to be among the first wave of scholars to teach the syllabus, as a professor at an institution on the quarter system and as a participant in my university’s Fiat Lux program. Unlike a typical four-unit course, that would require approvals and scheduling well in advance, Fiat Lux courses are one-unit small discussion seminars with approvals occurring the quarter preceding it. They are designed to encourage student-faculty exchange around pressing topics and faculty expertise. In my class, we meet weekly to discuss resources from the #ImmigrationSyllabus.

Building on the public-facing intent of the syllabus, students conclude each week by breaking into small groups and posting a reflection on Twitter. From shared handles selected by students (i.e. @BruinImmig19, @ChicanoBruins, @UCLAImmigration), each group answers a weekly question posed on the syllabus, itself, with the hashtags #ImmigrationSyllabus and #WeekX. Writing about #Ferguson, scholars Yarimar Bonilla and Jonathan Rosa have argued, “social media participation becomes a key site from which to contest mainstream media silences and the long history of state-sanctioned violence against racialized populations.” Although “hashtag activism” has its limitations, by bringing the conversation back to social media we hope to generate a conversation about immigration in the United States in the public sphere. Will you join us? 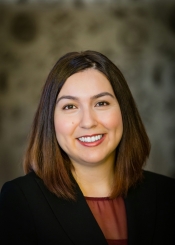 Genevieve Carpio is an Assistant Professor in the César E. Chávez Department of Chicana/o Studies at UCLA. She completed her Ph.D. in the Department of American Studies and Ethnicity at the University of Southern California and was a postdoctoral fellow in the Department of History and Program in Ethnicity, Race, and Migration at Yale University.
#ImmigrationSyllabus | Teaching
← Refugee Soldiers, American Patriots: Canadians in the Quest for Independence
Border Walls in a Globalized Age →
#