Repatriation Agreements of the United States, Mexico, and Canada

In today’s world where the Trump administration is stepping up deportations, understanding the process of immigration enforcement actions is more important than ever. One of the least understood components in recent history, including by many historians, is called the repatriation agreement, which streamlines immigrant removals after a person has been ordered from a country. Without these agreements, officials deporting an immigrant must secure approval through individual negotiations with consular officers of the receiving state—a process that can take weeks or months. In North America today, Canada, the United States, and Mexico all use repatriation agreements to expedite the deportation of immigrants.

Since 1987, formal repatriations agreements have structured most deportations between Canada and the United States. When Canadian authorities want to deport a U.S. citizen or U.S. national, they take the person to a U.S. point of entry (POE). As outlined in these agreements, “The receiving U.S. POE will accept verbal notice of the deportee’s return to the U.S. if they are properly documented” with a passport, emergency travel document, birth certificate, certificate of naturalization etc. Whatever the document, it must meet standards outlined under the requirements of the Western Hemisphere Travel Initiative (WHTI). For cases involving persons of interest to law enforcement authorities in the United States, Canadian officers must contact U.S. law enforcement ahead of the deportation and provide the details of the person’s travel arrangements. In cases involving drugs or criminal convictions, Canadian immigration officers must also notify the U.S. immigration attaché in Ottawa. Removals and returns from the United States to Canada operate similarly.

The repatriation agreements that U.S. officials use most are the ones that facilitate deportations to Mexico. These differ from Canadian-U.S. patterns, not only because of the sheer volume of people processed under them, but also because the largest U.S.-Mexico repatriation program operates regionally. As of 2009 there were 30 Local Arrangements. These formal, bilateral arrangements signed between Mexican and U.S. officials exist for the border inspection points along the U.S.-Mexico-border. Each uses slightly different mechanics. The Local Arrangement for the U.S.-Mexico Border at Laredo, for example, specifies that U.S. officials can bring groups of no more than 60 repatriates over the Juárez–Lincoln International Bridge, with intervals of at least thirty-minutes between each group. According to the Local Arrangement for El Paso, each of the border ports are open 24/7 to process adult males. Unaccompanied minors face a slightly different processing stream; they are repatriated through the International Bridge on Monday through Friday at the Mexican Consulate or, from 4:00-8:00 pm, they can also be directly handed to representatives of the Instituto Nacional de Migración. Women and disabled migrants also have a separate processing stream; U.S. officials can only remove or return them across the International Bridge during daylight hours. The arrangements for repatriating Mexicans under the criminal status provisions of immigration law operate differently, too, with specific time and days, along with notification requirements.

Since 2012, U.S. Immigration and Customs Enforcement (ICE) and the Mexican Ministry of the Interior signed another repatriation agreement called the Interior Repatriation Initiative (IRI). This agreement enables U.S. immigration officials to remove and return people to the interior of Mexico, away from the U.S. border in efforts to interrupt return migration.

One of the breaking stories in repatriation agreements in the recent past is taking place along Mexico’s southern border zone. Since 2010, and especially since 2014, Mexican officials have stepped up their deportations to the Northern triangle—to Guatemala, El Salvador and Honduras. In this surge in deportations, Mexican officials have developed reciprocal agreements similar to those that structure deportations of people from the United States to Mexico. Busses that leave Mexico to the Northern Triangle are only sent on certain days and times. Little has been written about these relatively new agreements, but when I asked a scholar with the Migration Policy Institute, he said the most pressing concern centers on the removal of unaccompanied minors. Under current policy, Mexican authorities notify child protection services in the country of reception. Mexican officials, for instance, provide Guatemalan officials with name of a Guatemalan child about to be deported. The Guatemalan officials ideally—though of course not always—inform the child’s family. The hope, then, is that family members will travel, sometime hundreds of miles, to the reception center to pick up the child.

Repatriation agreements have had enormous consequences in the lives of immigrants and the power of nation-states. With the current high levels of nativism and racism in the United States, paired with the Trump administration’s prioritization of enforcement actions rather than integration and regularization programs, we will see the ways that repatriation agreements will be used and changed in the near future. 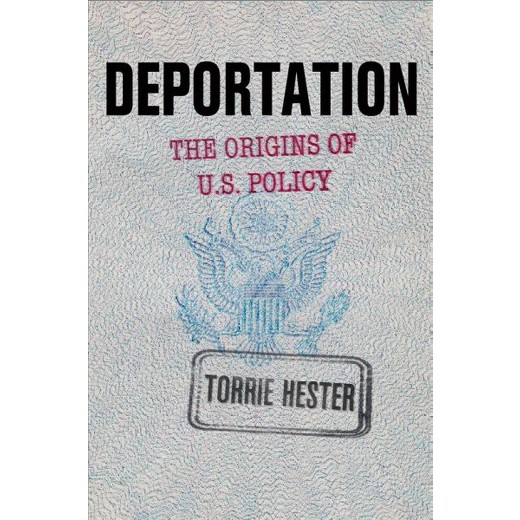 Torrie Hester is an associate professor at Saint Louis University. Her recently published book, Deportation, chronicles the unsystematic emergence of what has become an internationally recognized legal doctrine, the far-reaching impact of which forever altered what it means to be an immigrant and a citizen.
Borders
← Call for contributions: Nation of Immigrants teaching project
Bring in the gypsies: a case study in race and U.S. immigration policy →
#